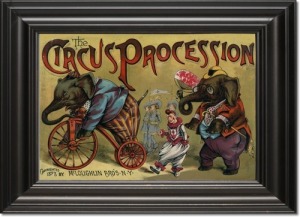 It would appear that the circus is getting its act together.
That does entail freeing the ‘wild’ animals from bondage.
Some circuses are learning and we can all be grateful for that.
The animals have learned about gratitude.  They are better at it than humans.
The humans are learning about humility.  They are slow learners.
The ringmaster has finally made an appearance.  His left hand sports a dramatic bandage.
He warms up with the dogs, an easy out.  The dogs always respond.
In any case, he is making a noise, showing his face, cooing encouragement and barking orders.
The dogs read his intonation and perform well for their master.  They understand instructions.
It is as well the tigers did not step up to his plate for starters.  They wait, each one.
The ringmaster dreads the face-off with the tigers.
He knows he will lose his first.

The elephants are not impressed at having been neglected.
They will not wear hats and dance on three legs when the ringmaster asks.
They will refuse.
This will bring punishment, but the elephants do not care.
Their grief has them well-prepared.
Twenty five years, slaves, they are well-learned.
Physical torture for a moment of truth does not shock them anymore.
There are of course those people in the circus who do empathise with the animals.
To an animal, empathy is more valuable than sympathy.
For a circus elephant, to wander up city streets now and again is a wild freedom.
Do not forget that the concrete jungle is as much a jungle as any?
Should you see an elephant in the street, salute it.  Say hooray.  Yay for freedom.
Should you see a man behind that elephant with a gun that kills, tell the elephant to run in zigzags.
What else can a hunted elephant do?

The clowns are simmering. They do not keep quiet about their marginalisation.
They are feeling left out and they want back in on the act.
What else is a clown to do, but clown around?
They are prepared to let go of the union, as demonstration of goodwill,
and
They have been working behind the scenes on a new show.
They admit their current work is shoddy, stale.
They have employed a young clown to teach the old ones new tricks.
For a circus clown it is not enough anymore to be merely human.
The ringmaster has softened slightly towards the clowns.
He knows his own days depend on their modified contribution.
Now that the wild animals were protesting,
his return was not as sweet as he had imagined it was going to be.
SHIT.  The elephants and the tigers with gripes.  That was enough to crack anyone.