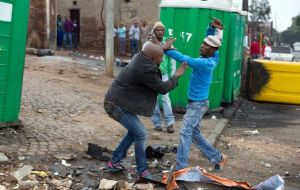 Xenophobic attacks on foreigners – fellow men and women – anywhere in the world are orchestrated by those to whom death is no stranger. Were it not contentious, I would perhaps suggest that those who murder difference are conditioned to do so. Like Somalian pirates have done their particular job

before. It is clear when the best of everything is at work. Your culture will decide for you what means what. What does NOT mean that.

There is a time for what is going on in South Africa, elsewhere. There is a place for what is yet to come. When you will stir shit by tainting the reputation of a proud nation, you will receive that shit straight back in your face. South African people are amongst the friendliest, most accepting and welcoming people in the world. They do not hate foreigners.

Africa is not in need of another Rwanda crisis. Or another Charles Taylor. Etc. There is a way to find common ground where the conflict sits. And the conflict sits. It will soon stand. This is not necessarily a bad thing. It may stand, and walk away. It may wait, watching. Conflict is not afraid of itself.

Xenophobia – or the threat of such – is enough to cause a moral panic the size of a giant tsunami. I suspect that would be its point. What is in a man that can make him take the life of another for the sake of a cause that does not belong to him? That aspect would be worth investigating. I suppose money

has something to do with it. There are too many people who have mapped their souls by capitalism.