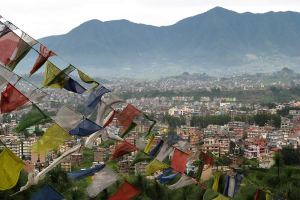 The presiding feeling that comes to me when I think of what has recently happened in Nepal – i.e. the powerful earthquake and its subsequent aftershocks – and the far-reaching consequences thereof, is that of gratitude. Not because the devastation happened, and continues to happen, but because if it wasn’t for the Nepalese people and their life philosophies, that magnitude of charge would have had to have been felt elsewhere.

I firmly believe that science has the theories to explain the earthquake. It does not have an explanation for the exact timing of the quake. It does not have an adequate explanation of why the earthing of a major charge happened to take place just outside Kathmandu. We should honour each of the dead in the way we would honour a soldier in another country.

Nature is not likely to abstain from her exclamations. Ever. She will outlive humankind, perhaps by design, perhaps by chance

. In this world anything can happen. Her demonstrations are not unkind, nor are they to be measured in dread by the death-count. I am sorry, it depends on how many people live where and in what quality of shelters they live. These things all make a difference to the destructive ‘reputation’ of Nature. How come an earthquake in one place does more damage to ‘human life’ than an earthquake in another?  It is something I like to think about.