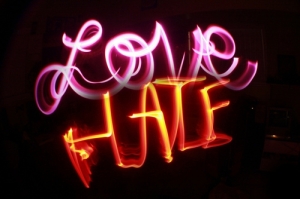 For there to be equilibrium on a universal scale, we need to balance the scales of love and hate.  There is a lot of hate circumnavigating this globe of ours.  There is too much war.  Too many old wars.  I am not speaking about the peace-making efforts of international forces, either.  Their’s is a job and they do it with our welfare in mind.  I don’t think it is easy to be trained to kill another man.  It goes against our very grain.  Ours is the will to live.  Where there is man pitted against man because belief-systems differ, there is war.  War of heart, war of mind.  When you explain to a boy that he will hate another man because of what he stands for, you are taking away his freedom.  When you tell a boy that he has enemies before he has had a chance to explore a life without strife, you are forcing your prejudice down a virgin throat.  It’s abusive.  Why can these violent nations not see what damage they are doing to their own children?  They are systematically crippling generation after generation of boys, men.  The hatred that is cultivated in dark man-corners and passed on proudly from father to son is thwarting the evolution of a lot of males on this planet.  In order to progress, you have to change your thinking.  You cannot escape this reality.  I, for one, am tired of hearing Israel and Palestine bleating about the same grievances they’ve been bleating about for decades.  Their voices are noise, their words, empty.  The fact of the matter is they do not want to find solution – that is the point that should be made.  Why does everyone skirt around this issue?  There is too much deliberate ‘not-offending’ going on in our first-world societies.  Too much lip-service and arse-kissing.  How far do we go with covering up how flawed a lot of belief-systems are?  The men who perpetuate war are behaving like children.  They will all have the last word and they will all have their way in a world that must accommodate everyone.  Did you not hear that we are all entitled to an opinion, as long as we don’t think it’s the only one?  When did anyone on this planet get anywhere worthwhile without compromise?  When you are dealing with real people, you must employ diplomacy and you must be prepared to adjust your opinions.  Compromise means you look at a situation from other sides.  You appreciate that there are people whose ideas are bigger, better, than your own.  You do not hold on to an old rage.  What is the point of that?  The horrors happened, people died.  The point is to prevent the situation from escalating further and the only way to do that is to get these old schools of thought to modify their thinking.

I think the bible is questionable as a life-manual.  It is an interesting metaphor, a vivid story – and the ten commandments are good – but as a work of fact (dare I say truth?)  it fails dismally.  I think too many people take its lessons too literally and this raises questionable expectations of a god, his son, his spirit.

I think the Koran speaks a great truth.  Allah cannot have as many followers as he does without having something truly inspiring to say.  Perhaps their ‘religion’ is timeless, the Muslims.  Their language is fluid, it is evolving and spinning and whirling like a dervish, and their faith is very strong, a feature of their society.  Perhaps we could all learn something from a people who understand devotion.  Do you know how powerful the reach of devotion?

I think it’s time we asked one another what it is that we can do to make amends in this fractured world.  We cannot ignore that we have issues, complex issues of hatred to try and overcome.  I believe they can be overcome.  I believe the amount of hatred directed at the Germans – purely because of the Holocaust – has done a lot of damage to their existing psyches.  It is a form of oppression – the with-holding of love from a people – and a lot of love has been with-held from Germany because of their past.  It is time to move on from their dent in the past.  Rwanda has moved on.  That was a genocide on some scale.  Can you imagine being hacked to death with a machete?  Bodies lining the streets for weeks – piled so high cars had to drive over them to get by?  That kind of horror is as bad – if not worse – than anything done to the Jews during the war.  Can we not accept that there were two bloody great wars and get beyond their reach?  For gods’ sake.  I think god waits for the alarm of peace to sound.   We would all do well to work towards that silence.