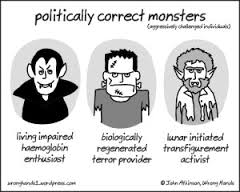 If it had been proven that being politically correct was a solution to the problems we face on this planet, I would have employed its ‘diplomacy’.  It wasn’t.  There are times when diplomacy is necessary, despite the idiots you may find yourself facing.  And diplomatic means that you speak your mind with regard for your person and respect for another’s intelligence.  It does not mean that you lie.  When diplomacy goes out of the window it is a sure sign that the shit is going to hit the fan.  When that fan is my face, you will know about it.  Every single one of you.

I am certain that political correctness had good intentions.  It was meant to dress up the mess of this planet in ribbons and bows for those whose sensitivity had already correctly identified it.  That was perhaps a kind gesture.  It was, though, counter-productive.  It showed contempt for the people who have been listening to a ‘truth’ with the view of finding solutions.  That this was in part unintentional – given that those who were preaching the bullshit did not know they had a sympathetic audience – is the only aspect that makes their lies acceptable.  And white lies are called white lies for a reason.  That is not to say that they are the only lies there are.

For those who may not know or understand political correctness for what it is, it is cowardice.  Avoidance.  It becomes a debilitating habit of telling a people what you think they want to hear instead of starting dialogue that addresses the real problems we all face.  That can be as a result of the ‘partriarchal complex’ rife on this planet – one that we have been conditioned to accept.  The belief that men are obligated to be the protectors on this planet.  Not all of them are.  Those that are not natural-born protectors – those who have misrepresented themselves as saviours – will be the ones who lie to you about your reality.  They will do this for two reasons:  either to save face, or to conceal their weaknesses, their actual inefficacy.

One response to “Political correctness – Blog No. 16”