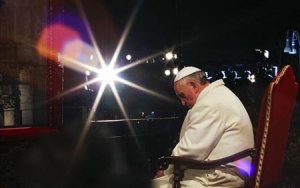 It has to be said, I am not a happy-clapper.  I am called ‘Catholic’, though I have not had my first holy communion nor have I been confirmed.  I have never sat in a confessional and told on myself.  I have never eaten the bread of Christ or drunk his blood.  I am skeptical about the religion Catholicism.  I am skeptical about the efficacy of the pope.  How can a man of his stature in this day and age be that against gay marriage?  Because it says so in the bible.  The bible is old news.  It adheres only to itself and in our globalising world that is dangerous, and irresponsible.  The bible says if you dare to be gay that you will suffer eternal damnation.  That is why these leaders must spout their nonsense about hell and gaydom.  Who of these leaders has been to the other side?  I would like to ask them that question.  How many gays have they seen burning in hell for their particular practice of passion?  I suspect not one, not really.  That they are condemned is a man-made thing.  The reality is that gays burn on earth.  Still.  And it’s not right.  That those who are gay suffer the prejudice they do bothers me.  Why exactly should you care who somebody else finds appealing?  Male, female – we all search to find that someone with whom we can ultimately be ourselves.  Our best mirror.  This search is constant.  Why should you be minding the business of a woman who chooses to be with another woman because the fit suits her needs better?  All her needs.  Why should it make your blood boil to think of two men in bed?  You should not be bothering so much about thinking of those things.  Let people be.  You do not have to condone every kind of behaviour.  Your personal rules will dictate to you what is not for you.  Let that realisation be enough.  If it is not for you, it is not for you.  It might be everything for someone else.  Be curious about gayness, if you must be something.  Do not be rude.  Who are you in the life of another to tell them where their heart may or may not fall?  The heart is notorious for making its own choices.  Trust your heart’s intelligence.  It fell where it did for a perfect reason.  It falls again, when it is ready.  Let it.

My concern is that the Catholic church is as rich as it is.  Do you have any idea what their property portfolio is like?  It’s obscene.  Do you have any idea the nett worth of the church?  Again, it’s obscene.  I would suggest to them that if they are as samaritan as they like to tell us they are, then they should donate nearly every cent of their revenue to the poor.  It’s about time they gave back.  They need to scale down their opulence; auction the treasures in their troves and sell a handful of their properties – and give the money away.  The church should never run at a profit and more importantly, it should grow itself up and stop trading on fear.  A god who keeps his people in line by threatening their existence is a childish god.  His notion of leading the Jesus-believers is out-dated.  You cannot hold a people in a cage forever on an empty promise.  Whoever believes that the church (and by this I suppose I mean all the churches under the Christian umbrella) is purely a charitable institution is deluded or misinformed.  The church has probably done as much harm as it has good, I think it is important to remember this.  How many honest worlds have the missionaries destroyed with their over-zealous preaching?  A lot.  How many very sick paedophiles did we find hiding under the Catholic shroud?  Too many.  How many Catholic orphanages were run by depraved abusers who acted with impunity?  Too many.  Did we hear from the church a clear condemnation of these people?  No – we heard a watered-down apology for ‘misconduct’ time and again.  In fact I think the Catholic church is one of the best at evading taking responsibility for itself.  Perhaps it needs help.  Perhaps it has never been able to ask for help?  It thinks too much of itself, Christianity.  That is not wise.  But the church is not wise.  It is self-indulgent, inflexible, and it is flawed.  I would like it to see itself for what it is.  I would like it to realise sometime soon that in this world, people go to jail for fraud.