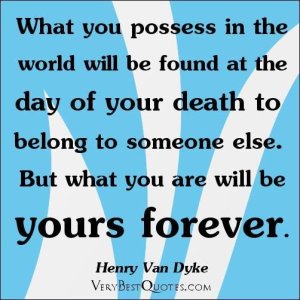 Once upon a time they said that possession was nine tenths of the law. Where did that leave the last tenth? In limbo, obviously. In this want-want world, possession seems to orbit the thoughts of many people. It seems to give them a sense of self-worth, a sense of pride. That is a pity. You cannot progress beyond the illusory substance of daily life when you are of the opinion that either owning ‘items’ or ‘people’ gives you some standing. It doesn’t. You can, however, possess your own mind. Your thinking. Those go with you wherever you go – and are with you in whichever eternity you end.

I will say it again. You cannot hope to possess a person. That includes your progeny. Such is not possible. The tighter you squeeze – through your own insecurity or the need to dominate another – the further the person you are trying to own will go. It is perhaps like trying to frame a living rainbow. Or contain a feral cat in an old bag. You will simply not succeed. In fact, you may find that by merely trying, you consign your future to the universal trash can. That is not what you want to be doing with the time you have left. The universal dustbin has now officially been emptied, so to find yourself languishing there would be dire, indeed. Certainly you will be devoid of friends and the family you may encounter

in that insipid darkness may not be what you are familiar with.

When did the notion of possession get out of hand? Who decided to propagate the principle of such possibility? I think it must have been the early capitalists that got the premise wrong. That is not a problem. We can change it. We can change the premise, and their thinking. All it will take is to show those who follow a wrong set-up that giving is guaranteed to take you far further than the now, the immediate. Giving can open doors that have until this day, stayed closed. If you are not of the giving mindset, then enjoy your time in the trash can. Believe me, it will last forever. 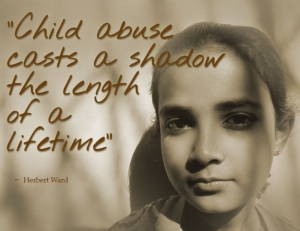 I am not quite sure this planet realises how problematic it is that children are not treated right in too many parts of the world.  Probably in every part of the world.  I cannot understand the need people have to breed and then abuse their children.  Why would you procreate when you cannot handle having a child?  And motherhood – and fatherhood – is about handling your progeny, not annihilating them.  That – to me – is possibly the most stupid of all human behaviours.  Breeding willy-nilly without thought of consequence, just having babies because you cannot be bothered not to.  It’s obscene.

Children are vulnerable and very impressionable.  All of them.  How many times does that have to be said before people take heed?  What you show your child of life is how it will grow.  The reality is startling in its simplicity.  You kick your child around, or abuse it verbally and emotionally, and you are building a damaged human being.  There is not much space left on this planet for damaged people.  There are already way too many.  It is time that the damaging was brought under control.  It is ruining people, society.  I am not sure what would happen if every abuser took accountability for his/her behaviour – recognised it, themselves.  If they opened their eyes they would realise the fate that was awaiting them.

Having children is not ‘what you do’ in life.  Times have changed.  How hard can it be to understand that parenting is not an essential part of living?  How hard can it be to understand that there are a great many lives that would be far less stressful without children in them?  That is fact, it is not something to feel sentimental about.  Children are a joy on many levels, and that is what they are supposed to be.  They are not punch-bags.  They are not adults.  They are not to be underestimated, either. 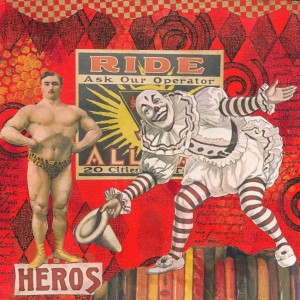 Tonight the flaming hoops story is new. The tigers have rewritten the script.
The vampires can feel something is up. They swarm to the ticket office.
The tent has a maximum capacity.
This is one show no one is keen to miss.
No one will miss it. It will be pirated and sold on.
That is always the way. They will make the copy worthwhile.
This night, yesss, this one, there will be blood.
A great deal of blood.
The ringmaster just doesn’t know it yet.
The lions have yet to weigh in.
They have thus far remained silent, detached.
That is the luxury of a lion’s say-so in today’s world.
Watch out for what the lions discuss when no one is watching.
They have evolved from circus freaks into machines bred for the bullet.
How advanced is Natural technology? They are under no illusions.
They will always be King of the Jungle.
Go and ask Mowgli. He will tell you what is what.

The vampires bring their progeny to a show such as this.
It is worth the corruption of their young souls.
To see the wild win for a change will lift morale.
The children will bay like wolves. It is their instinct.
The dogs will not perform well if their slot is after that of the cats.
The baying of wolves will unsettle their senses.
For the first time, they will feel divided. It makes sense to divide a pack.
It confuses the master.
The Master. The vampires snigger into their sleeves.
Now that was funny.
What would excite the patrons was the blood-trade spectacle.
It would bring the animals’ eyes alive. It would be best if the hoops were afire.
That would add atmosphere.
If the ringmaster left the gate ajar, that would add atmosphere.
Once he was dead, beheaded, what stood between the angry cats and man?
Vampires in human form die human deaths. That was the dare.
It was their choice to visit the circus on a wild Friday night.
At moonrise it will become clear who sleeps, who wakes.
The tigers have made sure of that.

The fact that the ringmaster came back disappoints many of the circus performers.
Their sentence seemed shorter the other way, when the circus ran itself.
Not to worry. After the cats come the clowns.
They would make everyone smile. It was their job.
They were paid to clown around, so they must clown.
They had better bring the house down.
If they failed, they would be fired. A simple understanding between puppets and master.
Master. The clowns grumble his status into cupped palms that they fling wide, sideways.
They throw out the name with determination. A curse to be rid of.
Send it out. Out. OUT. There is no space in the tent for curses.
The animals can hear their dense man-whispers. The hiss of spit hitting dry hands.
Circus people were superstitious with good reason. Be careful what you summon.
The curses must stay outside.
They are on the naughty step until they learn the first aspect of values.
The gypsy sits outside in her painted caravan. It rests on the backs of two pitch horses.
The red looks good against their black.
She reads for people. Whoever, whatever. She follows the circus and she speaks out.
‘Cross my palm with gold,’ is what she wants to say, with a wink.
She says deadpan, ‘Five bucks, fifty.’
It is not just the wild animals whose eyes have died.